Bland, watery chili’s got you down? This real deal vegan chili is here to help. Made with real dried chili peppers, two kinds of beans, and NO random vegetables, this is the vegan chili that’s hearty, satisfying, and tastes like what you’re craving. 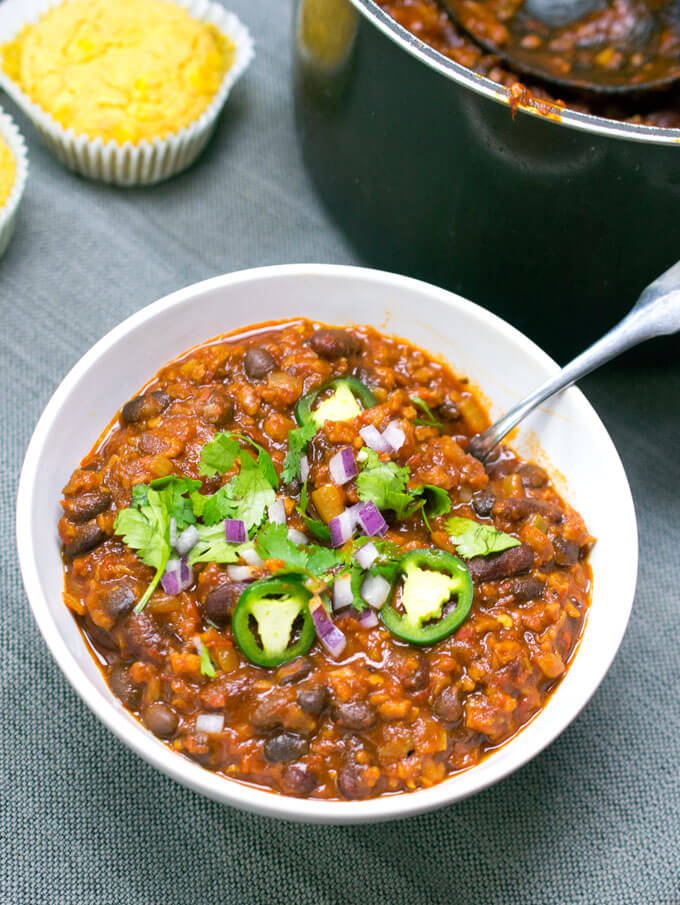 Plus, it’s naturally free of added sugar or sweeteners, nut-free, and easily made gluten-free! Packed with 19 grams of protein and 13 grams of fiber per serving, low fat, high in vitamin C, vitamin A, and iron… is this the best meal prep chili ever? I think it might be…

I’ve been trying to perfect my vegan chili recipe for a while. Years, actually. A search deep into my Google Drive shows that in 2015 I developed a concoction that featured about 10 condiments from the pantry and many forms of sugar. (I was even drafting a blog post about it that was an ode to my ex. Tells you all you need to know…)

Then in 2018 I wasted time trying to make a copycat Amy’s chili (from the can). After meticulously reverse engineering all of the ingredients, I realized that I don’t like Amy’s chili all that much. (See a photo of my fail below).

It must have been my vegan Chile Colorado that got the wheels spinning. Shouldn’t chili be made with…. chiles? Why was I trying to rely on store-bought chili powder, of varying quality and freshness, for a dish where that ingredient should be the star?

And thirdly… Why do so many vegan chili recipes claim to be classic but ask you to add things like celery, carrot, sweet potato, butternut squash, or quinoa?

I can get on board with a well-made veggie variation, although some of the ones we tried were glorified vegetable stew with zero flavor, let alone pizzazz.

At the end of the day, a truly classic vegetarian chili has been missing from my life – one that doesn’t taste like vegetables, but like… (together now) chili.

How to make vegan chili 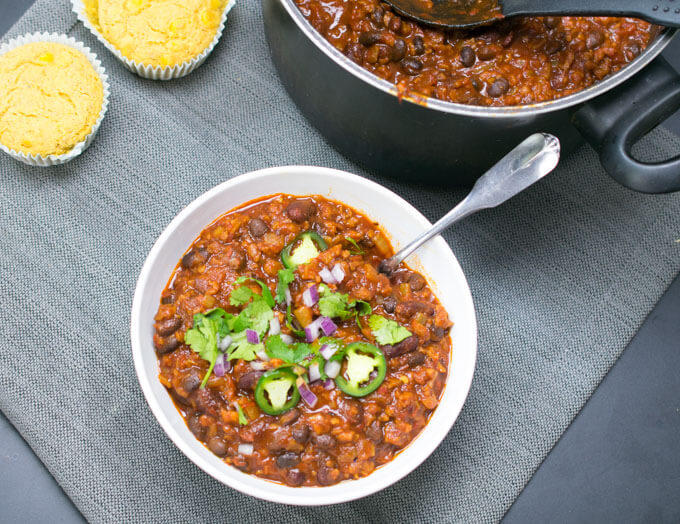 This recipe is made with the following ingredients that, I humbly submit, all help to make it the best vegan chili!

A blend of dried chile peppers. Some spicy, some fruity, and some rich. I’m partial to de Arbol, guajillo, and New Mexico chiles, but I’ll give you some alternatives in the recipe box. You can make this vegan chili as spicy or mild as you like, depending on the chiles chosen.

TVP (Textured Vegetable Protein). That ultra-cheap, super-meaty product often found in bulk bins or sold by Bob’s Red Mill. It adds a lot of protein to this meal, but more importantly, it adds a texture like ground beef, which is essential for the feeling of “classic” chili sin carne. Some alternatives to TVP are tofu, finely-chopped mushrooms, or even something like Beyond Meat crumbles, but TVP is the cheapest, easiest to prep, and best at absorbing flavor.

Black beans and kidney beans. I use both to keep things interesting, but you can use whatever beans you like. You can even make a no bean vegan chili if you wish, just simply omit them! Whatever type of beans or lentils you add, cook them first. No legume, even red lentils, is going to soften properly if you try to cook it IN the chili, because the acidity of the tomato mixture will cause the skins to seize up.

Spices and aromatics. Nothing fancy at all here – garlic, onion, cumin and dried oregano are all you need to support the chile flavor.

Tomatoes. Crushed tomatoes or tomato puree (not sauce) work best, because they soften easily. Canned diced tomatoes have trouble breaking down because of the way they’re preserved, and big tomato chunks in chili are none too pleasing to me, even though a tangy tomato undertone is a must.

Umami helpers. To make up for the savory, umami flavor that would normally be provided by meat, I use a trio of “umami helpers” – soy sauce, light beer, and marmite. Marmite, you say?! Yes, it’s a master of providing concentrated savory flavor, but in the recipe card, I suggest how to substitute for it, since I know it’s not so common in the states.

Oil and salt. The oil and salt are both really important to creating a Maillard reaction and bringing out the flavors I’ve worked on building here, so I wouldn’t stand behind a version that isn’t cooked with oil or salted properly. There isn’t much of either – I’m still firmly on team “this vegan chili is overall healthy”. That isn’t to discourage folks from sharing their variations in the comments below! But please know that you’ll need to adjust other seasoning accordingly.

As for how to bring all of these ingredients together… well, you’ll just have to read the recipe below! It’s an easy if loving process. I’ve also included a recipe video to leave nothing to doubt! 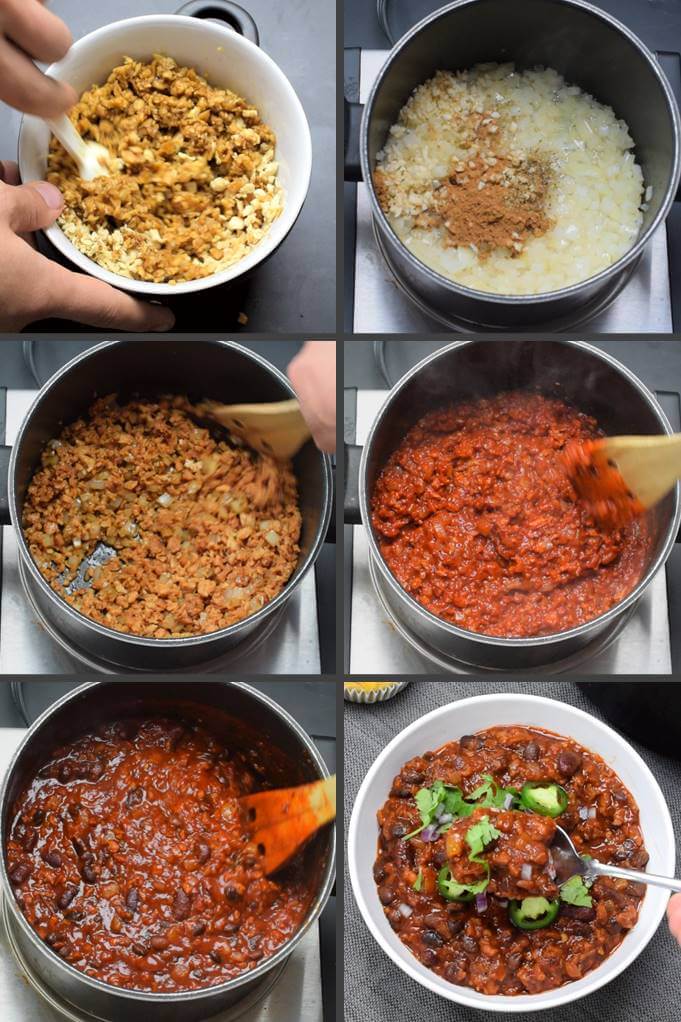 Want your vegan chili to have award-winning, slow cooked flavor? There’s no need to simmer it in a crock pot all day. This recipe is easy to pull off, but for A+ flavor, do follow these tips:

Leftovers. This vegan chili freezes wonderfully! It tastes better than the canned kind, and you can make a huge batch and freeze it, so go wild! If you aren’t freezing it, leftovers keep well in the fridge for up to a week.

Soy substitute. There are a number of soy products here. I’m hesitant to suggest a soy-free variation. Between the soy sauce and the TVP, you’re going to end up with a pretty different recipe without.

A soy-free vegan meat crumble could work well, but coconut aminos just is not up to snuff for this application so you’ll need to have something up your sleeve to replace the soy sauce. If anyone figures it out, let me know! 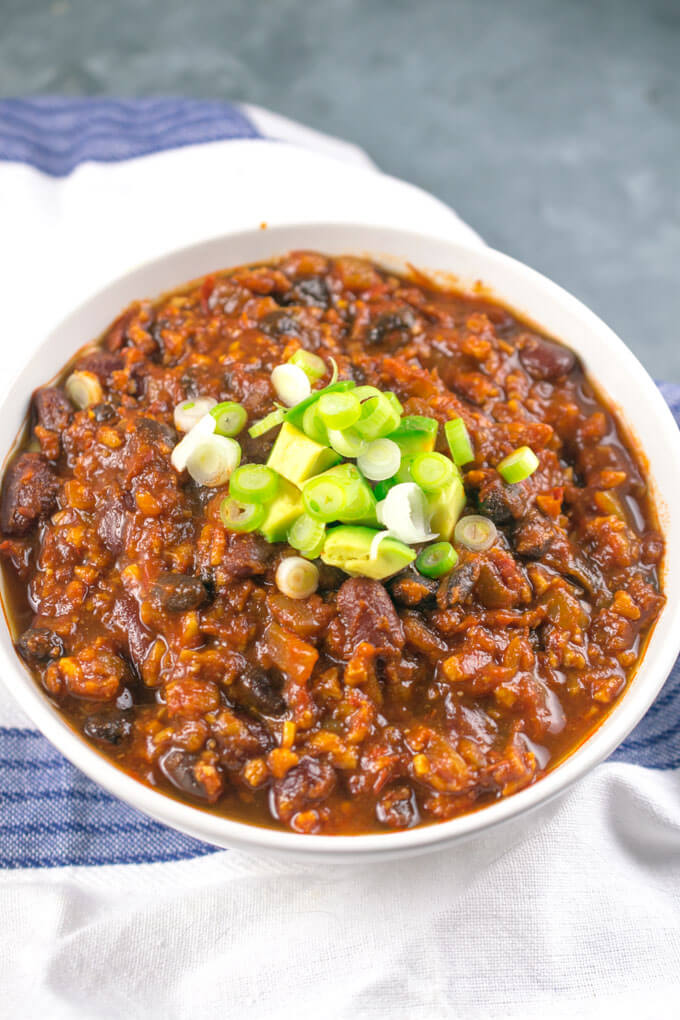 This photo is from a batch of the vegan chili that I cooked for a shorter time at a more rapid simmer. It’s not as flavorful or rich, but can be done if you’re running out of time!

Gluten. The gluten here comes from the beer and from the soy sauce. The soy sauce can be replaced easily enough with tamari. Try a gluten-free beer or instead of the beer, add about 2 tablespoons of bourbon. I tested this, and then suffered from the sad circumstance of needing a usage for my extra bourbon.

Serving suggestions. Ain’t nothin’ better than chili and cornbread. I wish I had a gluten-free vegan cornbread recipe for you, but sadly all of them have crumbled my heart to pieces thus far. Use your favorite and enjoy.

Toppings-wise, I’m personally satisfied with some cilantro, red onion, and jalapeno. Cashew sour cream is great here if you have some handy.

You can use this vegan chili on nachos, chili cheeze fries (ooh.. I went there), stuffed inside an acorn squash, or atop a veggie burger… the possibilities are endless! 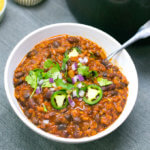 Seriously the best vegan chili, made with real dried peppers and packed with complex, spicy, umami flavor. Takes some time to make, but it’s easy and great for meal prep!

TVP: A form of soy protein that has the texture of ground meat, this item is often sold in bulk bins, at natural stores, or at a normal grocery store sometimes. It’s made by brands like Bob’s Red Mill and can be ordered online too.

I find all of my dried chiles in the Latin section of my regular grocery store.

It’s good to have a little bit of each type to round out the flavors. The possible combinations and substitutions are somewhat endless. If you can’t get the specific chiles in my recipe, your goal to be to have combination of both hot and mild; and of both earthier (you can usually tell by the darker color) and sweeter (redder color) flavors.

Chipotle peppers in adobo sauce are a specific product that comes in a can. It should be in the Latin aisle of your grocery store (the Goya section, if you have one).

MARMITE: You can substitute marmite with vegemite, nutritional yeast, miso, or soy sauce; or just omit it.

This recipe couldn’t have existed without Kenji’s recipe over at Serious Eats! Adapted with many thanks.

Ask and you shall receive! Here’s a side-by-side of canned chili with mine! I will never go back! 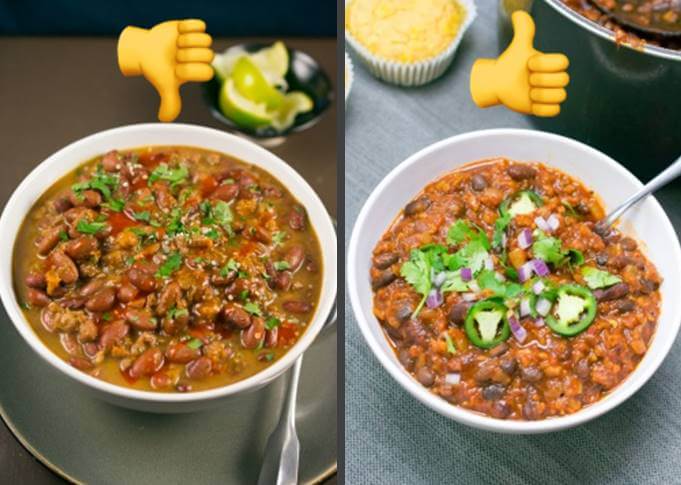