Apparently I just can’t be stopped until I create a bacon analogue out of every plant under the sun! I am utterly and completely hooked on tempeh bacon right now. Today I’ll be showing you how to make amazing tempeh bacon that’s as good as a restaurant’s, and then later I will show you how to turn it into one of my favorite sandwiches of my life thus far. 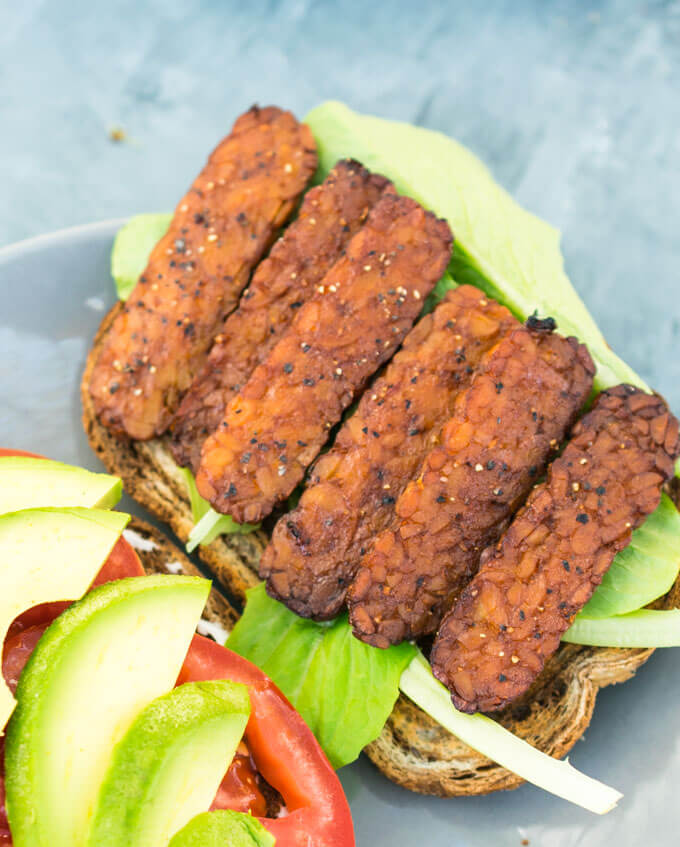 What is tempeh bacon?

Nobody’s claiming that this bacon-ish confection tastes just like the kind made from animals, but it is:

Tempeh itself is a food made from whole soybeans that are cooked and then cultured, forming a solid shape that can be sliced thinly like bacon. It has an earthy and slightly sour flavor on its own, but is a sponge for flavors and a great source of nutrition.

To make tempeh bacon, you’ll marinate tempeh in a seasoned marinade, then bake it in the oven on a rack to get it nice and crispy, while brushing it with more seasoning. Let it cool until crisp and then you’re ready to rock! The whole thing doesn’t take more than a few minutes of hands-on time.

Why make tempeh bacon at home?

In 2019, there are countless brands of tempeh bacon that you can buy at your local Whole Foods, other natural stores, or even your neighborhood grocer if you’re lucky! Some common brands are Lightlife and Tofurky. 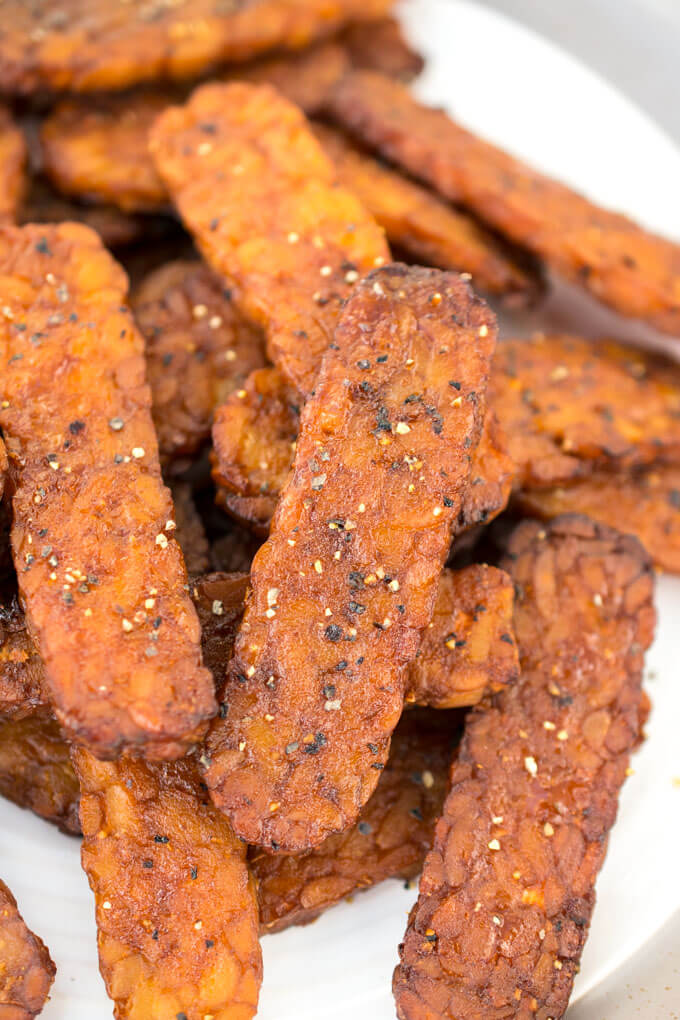 I’ve tried most of the products available to me, and along the way, I noticed that store-bought tempeh bacon never seems to taste as good as the kind I’ve tried at restaurants. I recalled one of my cardinal rules of recreating restaurant dishes (which I often do to save money): use plenty of salt and fat.

Many homemade tempeh bacon recipes are fried; my version is baked, as a compromise. Nevertheless, oil is important for both dispersing the flavor evenly as well as for getting the proper texture and for diminishing any tempeh aftertaste. So, if you’re looking for a no oil/oil-free recipe, I’m afraid I don’t have that on offer. That said, the tempeh definitely doesn’t absorb the full amount of oil in the marinade, so it’s not as bad as it might sound :). 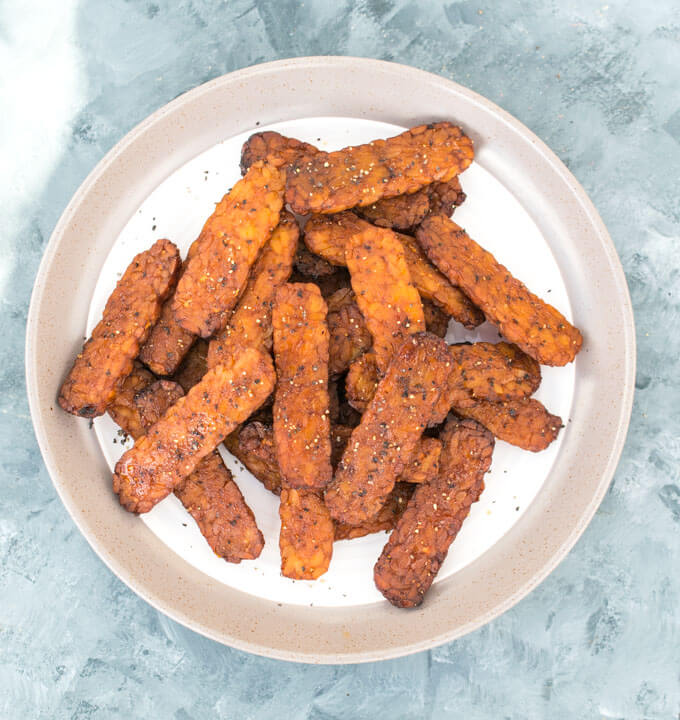 Is tempeh bacon healthy? I’m not sure if I would go that far. It is a source of some important nutrients but is also made with oil, maple syrup, and some products that are relatively high in sodium, so depending on your needs, it may or may not be an A+ healthy choice. However, relative to other vegan bacon substitutes it’s certainly no worse, and it’s definitely not fattening the way that “real” bacon is.

Another reason to make this recipe at home is that you can control the ingredients and guarantee that it is gluten-free by using gluten-free soy sauce or tamari. Soy sauce is a common ingredient in bacon-style vegan foods and does generally contain wheat.

Some delicious ways to use tempeh bacon include:

If you give this tempeh bacon a try, let us know in the comments below, or tag me on Instagram (@yupitsvegan)! 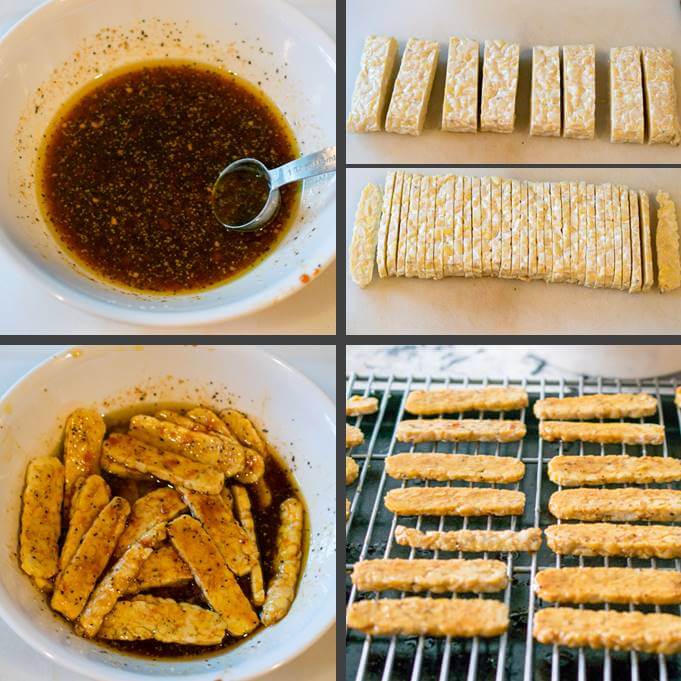 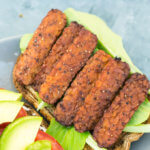 Smoky black pepper tempeh bacon, made by marinating tempeh and then baking it until crisp. Great on sandwiches or for snacking.

HOT PAPRIKA: This marinade needs a bit of a kick to round the flavors out, so I used hot paprika, which I keep in stock. If you don’t keep spicy paprika around, use 1/4 tsp regular or smoked paprika, and 1/4 tsp of cayenne or red pepper flakes.

NUTRITION: Nutrition facts are calculated using 3/4 of the marinade. Mine absorbed just over half so I’ve rounded up to be conservative.

Adapted from my Tofu Bacon and inspired by Hudson Street Deli.

Be sure to also check out my Vegan Rice Paper Bacon for a quicker, lower-fat option!